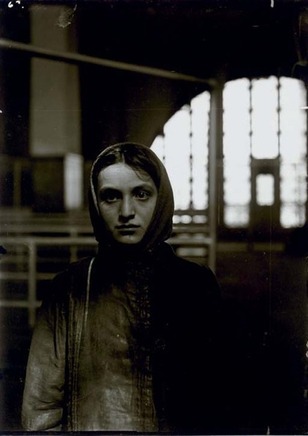 Who was Lewis Hine? Why is he in a pantheon reserved for a rare few photographers? Frank Manny found him, possibly as an obscure teacher in a normal school in Oshkosh, Wisconsin, and brought him to New York to teach at the Ethical Culture School. Hine was completely without experience, but Manny urged him to become the school photographer and in this way he gained technical expertise.

The compassionate vision which Hine maintained throughout his life had other roots. His revulsion against the use of children in the early twentieth-century American industrial labor force and his empathy with all those who toil were not based on hearsay evidence garnered from books or newspapers. His own experience-in a furniture factory, a bank, a retail store, thirteen hours a day, six days a week for a miserable four dollars in wages-colored his entire existence and filled him with a passion from which he could never escape.

Ellis Island became the crucible that formed Hine, gave him direction, and schooled him for what was to follow. Millions of men, women., and children from Middle and Southern Europe churned through the port of New York between 1903 and 1913, laden with newly acquired names and Old World baggage. Waiting to be told whether they were to stay or be sent back, these bewildered souls, herded in pens, clutched their tickets, name badges, and children's hands as they hung on to their visions of a new life. And into this polyglot, straining mass came Hine, sometimes with Manny trailing along as assistant.

Today's young photographer, with 35 mm camera and Tri-X film, must marvel at Hine's skill and tenacity. Amidst crowds of anxious immigrants milling about, Hine had to locate his subject, isolate him from the crowd, and set the pose-almost always, because of the language barrierf without words. He had to set up his simple 5 x 7 view camera on its rickety tripod, focus the camera, pull the slide, dust his flash pan with powder, and through his own look and gesture try to extract the desired pose and expression. With a roar of flame and sparks, the flash pan exploded, an exposure was made, and beneath the protective cloud of smoke which blinded everyone in the room Hine would pack up and leave. A second exposure was out of the question; one shot was all he had.

Hine's Ellis Island photographs pay homage to people who had left their homes and traveled across the ocean under near slaveship conditions to seek a new beginning in a strange land. Whether it is the young Czech woman in native costume, or the proud and sorrowful old Jew, we gain fresh insight through his vision. Each individual's stance and gesture allow us to grasp the essence of a particular time to look at the portrait of an age. Although the immigrant's dream was seldom to be matched by reality, the beauty Hine saw in his subjects was a distillation of the known terror of the past and the uncertain hope of the future. His Ellis Island photographs are among the finest in all of photography. They constitute the New World's twentieth-century epic poem, a paean in honor of those who came to our shores for sustenance and, in turn, sustained us.

As do all serious artists, Lewis Hine regarded his work as a moral responsibility. It quickly became evident that his Ellis Island "Madonna" the proud Jew, and the beaming German family were all to become cheap labor, exploited by an unfeeling and greedy system. They would be tested in ugly tenements, suffocatingly hot in summer and freezing cold in winter, boxes without heat, hot water, or toilet facilities. The dream would expire in sweatshops at starvation wages or in dreary, endless toil in tenement homes. And the greatest of all crimes, the exploitation of children as laborers, would wither the hope and grace of the young.

This degradation was to become his obsession; it would give him no rest. No matter the weather or his state of health, Hine was in the field documenting the misery of exploited children. In the Child Labor Bulletin of 1914 he wrote: "For many years I have followed the procession of child workers winding through a thousand industrial communities from the canneries of Maine to the fields of Texas. I have heard their tragic stories, watched their cramped lives and seen their fruitless struggles in the industrial game where the odds are all against them. I wish I could give you a bird's-eye view of my varied experience." His photographs did much more than that.

Certainly, Hine was conscious also of the aesthetics of photography. He worked so hard and traveled such distances that the time spent on each print must have been minimal. His files contain beautiful prints as well as mediocre ones. But when he organized a photograph, the effect was right. Considering the range of subject matter, the difficulties of site and execution), his vision is always fine and often superb.