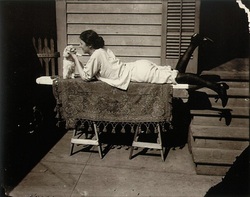 "FIRST 0F ALL, the pictures are unforgettable - photography's ultimate standard of value. And it's not hard to see why the trove of glass negatives by a hitherto unknown photographer working in New Orleans in the early years of this century became one of the most admired recoveries in photography's widening, ever incomplete history. Eighty-nine glass plates in varying states of corrosion, shatter, and defacement was the treasure that Lee Friedlander came across in New Orleans in the late 1950s and eventually purchased. When, in 1970, a selection of the ingeniously developed, superb prints Friedlander had made was published by the Museum of Modern Art, the book became, deservedly, an instant classic. So much about these pictures affirms current taste: the low-life material; the near mythic provenance (Storyville); the informal, anti-art look, which accords with the virtual anonymity of the photographer and the real anonymity of his sitters; their status as objets trouves, and a gift from the past. Add to this what is decidedly unfashionable about the pictures: the plausibility and friendliness of their version of the photographer's troubling, highly conventional subject. And because the subject is so conventional, the photographer's relaxed way of looking seems that much more distinctive. If there had once been more than eighty-nine glass negatives and one day a few others turned up anywhere in the world, no one would fall to recognize a Bellocq ... Bellocq's photographs belong to this same world of anti-formulaic, anti-salacious sympathy for "fallen" women, though in his case we can only speculate about the origin of that sympathy. For we know nothing about the author of these pictures except what some old cronies of Bellocq told Friedlander: that he had no other interests except photography; that "he always behaved polite" (this from one of his Storyville sitters); that he spoke with a "terrific" French accent; and that he was - shades of Toulouse-Lautrec - hydrocephalic and dwarf-like ... Most obviously, it could not be detected from at least a third of the pictures that the women are inmates of a brothel. Some are fully clothed: in one picture a woman in a large feathered hat, long-sleeved white blouse adorned with brooch and locket, and black skirt sits in the yard in front of a low black backdrop, just beyond which frayed towels are drying on a laundry line ... In some pictures, in which the sitters adopt a genteely pensive look, the emotion is harder to read. But in others there is little doubt that posing is a game, and fun: the woman in the shawl and vivid striped stockings sitting beside her bottle of "Raleigh Rye," appreciatively eyeing her raised glass; the woman in ample undergarments and black stockings stretched out on her stomach over an ironing board set up in the backyard, beaming at a tiny dog. Clearly, no one was being spied on, everyone was a willing subject. And Bellocq couldn't have dictated to them how they should pose - whether to exhibit themselves as they might for a customer or, absent the customers, as the wholesome-looking country women most of them undoubtedly were."

from Susan Sontag's introduction to Bellocq: Photographs from Storyville, the Red-Light District of New Orleans